Several years ago, I took a glimpse of Mastodon and thought I could deploy one. However, I soon forgot this matter. But recent news about Twitter makes me realize maybe it’s better to have a Twitter alternative. So after a long time of procrastination, I finally decided to deploy a Mastodon instance.

Why self-hosted: Because it’s cool. There’re many public Mastodon instances that let you create an account freely. You still need to follow their site ToS, and most of them don’t have an SLA. Since I’m using a decentralized service, deploying it myself is an interesting part(Maybe the most!), and it’s a good chance to get familiar with the ecosystem. 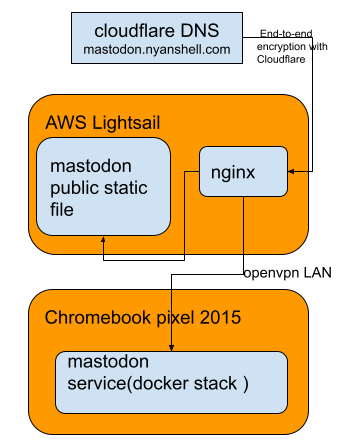 Mastodon is a Ruby-written web application which relies on PostgreSQL, Redis, Elasticsearch(optional for text search). Deployment could become complicated without proper orchestration. Luckily they provide a YAML configure file for docker-compose in the repo, so we could just change some configuration and the whole service could start smoothly(almost). I just followed up instructions from these blogs to complete my deployment at my home server(Chromebook pixel 2015, 16GB i7-5500U):

And there’re also some noticable adjustments:

After the deployment, validate the services status with docker service ls command. If anything goes wrong, see what happened inside the container via docker logs <container-name>.

Next is to config Nginx on AWS lightsail. Because I don’t want to maintain a short period cert for TLS(e.g.: Let’s Encrypt) and expose my VPS’s IP, I chose Cloudflare’s end-to-end encryption mode. In this mode, Cloudflare gives you a self-signed certificate to communicate your server with Cloudflare, and the browsers also visit Cloudflare with encrypted traffic:

Mastodon also provide a Nginx sample config. I only changed backend & streaming server’s IP and updated some config about SSL:

Here I removed 301 redirect to avoid redirect loop error. And obviously, I don’t need a redirect when communicating with Cloudflare’s proxies. However, I wasted lot of time here.

Besides that, I also copied files in mastodon/public folder to serve js & css files.

Finally, I tried to log in with my admin account to see if everything went right, and then I found some permission issues in the postgreSQL and Redis(I missed folder privilege adjustment before). After that, everything goes smoothly.

A federation relay is an intermediary server that exchanges large volumes of public posts between servers that subscribe and publish to it. It can help small and medium servers discover content from the fediverse, which would otherwise require local users manually following other people on remote servers.

I found there’re many rely servers following ActivityPub protocol could help your site switch information with other instances. I added some top servers, and then the Federated timeline amplified with lots of toots(But there is a rate limit for the federated timeline).

After two days of deployment, the service runs smoothly, and the system load isn’t increased much: 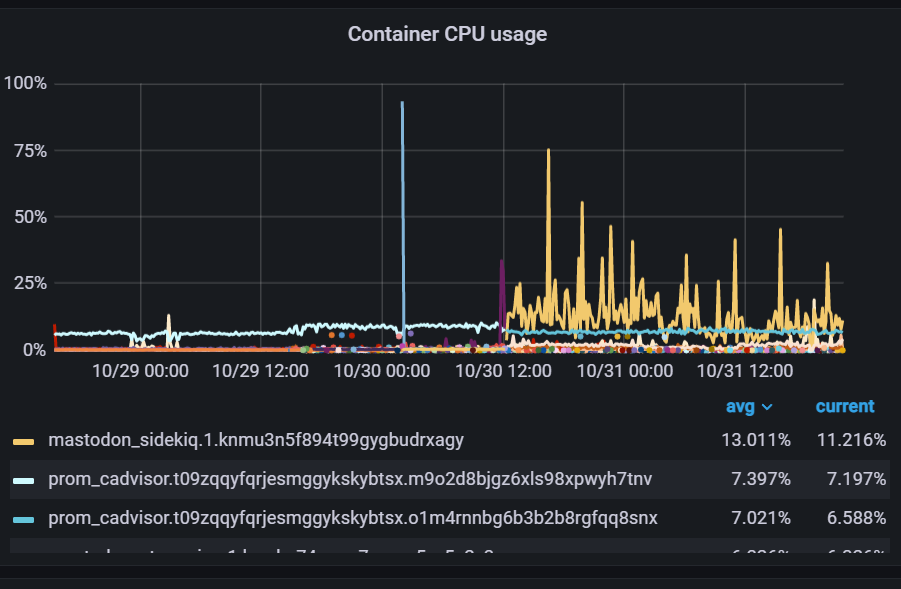 The increment of network traffic is acceptable, and the whole service occupied 4GB of memory(elasticsearch used around 2.6G):

Seems it’s enough for the single account use case.

Overall the whole deployment experience is good at modern microservice architecture. Especially it’s easy to create an isolated environment and do some experiments. However, if I want to make the service sustainable and decrease the risk of data loss, I need to do more investigation on Mastodon’s documentation. Because when I deploy services in this way, the details in the services are just like a blackbox (just like when I deploy LAMP services in university). Some service details (e.g., database configuration, indexes, user privileges) are easily neglected, and some issues from misconfiguration may show up in the future. Step-by-step deployment isn’t always convenient, but it always leads a peace of mind. After all, maybe I’m just not used to the docker toolchains. It’s obvious that IaC (infrastructure-as-code) could make services maintainable, and after several months I could also find what I had done before.